The COVID-19 pandemic has plummeted countries into a world-wide health and economic crisis with devastating impacts on jobs and livelihoods, and disproportionate impacts on women.  Frontline workers in highly feminised sectors, such as healthcare, social care, domestic work, food commerce, retail and cleaning  sectors, as well other operational sectors, such as transport and refuse, are working tirelessly to save lives and keep our societies going while confronted with enormous challenges at work: from exposure to physical and mental health risks, to increased overtime and exposure to violence and harassment. Millions of women in sectors who were deemed by governments as non-essential have already lost their jobs or have seen their pay and incomes depleted. And while for many working from home has become the new normal during national lockdowns, for too many women this means being exposed to domestic violence with limited or no access to services and support.

Unions are demanding that governments take immediate action to address these gendered impacts, including through the ratification and effective implementation of ILO Convention 190 (C190) and Recommendation 206 (R206) and the adoption of prevention and protection measures for victims of domestic violence.

Other governments who provided funds as part of their COVID-19 response packages include the UK, supporting domestic abuse services with £2 million; Australia, making available AU$ 150 million for family violence response; Mexico, aiming to transfer 405 million Mexican pesos to the National Network of Shelters; and Spain, approving a Royal Decree (1 April) that guarantees the care of victims of gender violence through multiple channels including the provision of hotel rooms for victims of domestic violence.

The ITUC has set up a webpage  highlighting unions’ work to address the issue of gender-based violence in the context of the COVID-19 pandemic, with information and resources including from the UK,  France, Uruguay, Chile, South Africa and Australia.

The pandemic reveals once again the critical importance of wide ratification of C190. Whilst governments’ attention is necessarily focused on dealing with the immediate health, social and economic consequences of the COVID-19 pandemic, we need to persist in our call for governments to #RatifyC190 within the context of the pandemic and its aftermath. 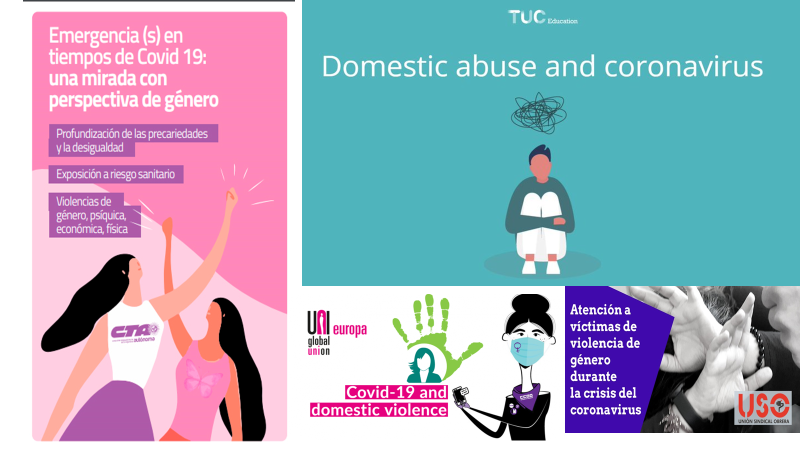 Recent and upcoming days of action:

In March, the president of Argentina, Alberto Fernández, announced at his first official address to the National Congress that he will promote the ratification of C190 and will launch a National Plan Against gender-based violence. Argentina’s commitment was confirmed by the ILO in a press release that cites Argentina, Finland, Spain and Uruguay as the first countries to formally commit to ratification of C190.

Guy Ryder calls upon all member states to ratify C190 “so that we can create a world of work that we want, free of violence and harassment in all its forms”

The president of South Africa, Cyril Ramaphosa, who is currently the chair the African Union (AU), has underpinned the urgency to act on gender equality and the economic inclusion of women and urged all member states of the AU to ratify C190:   “The empowerment of women also means that we need to end all forms of violence perpetrated by men against women. We are urging AU member states to ratify the ILO Convention on Violence and Harassment […], to work to repeal discriminatory laws within five years, and standardise responses to gender-based violence.”

A growing number of countries have taken steps towards ratification of C190 as reported by the ILO:

For more updates and union action to end gender-based violence and harassment, watch the recording of the ITUC webinar “Ratify ILO C190!” and read the news from unions from around the world below.

Watch the recording of the "ITUC webinar “Ratify ILO C190!” to get ratification updates and insights from Manuela Tomei, director of ILO WORKQUALITY department, and to hear from Ruth Cross, Equalities officer, USDAW (UK), and Sonia George, general secretary of SEWA Kerala (India), on how C190 can be used to improve working conditions for workers in the formal and informal economy. The recording is available in English, French, Spanish and Arabic.

Watch the recording of the Solidarity Center webinar “Unions Leading Creation of a Feminist World of Work” to hear how union leaders from Bahrain, Cambodia and Honduras are campaigning for the ratification of C190. The recording is available in English, Spanish and Arabic. (The webinar was co-sponsored by AWID, ITUC, Global Fund for Women, and Just Associates). 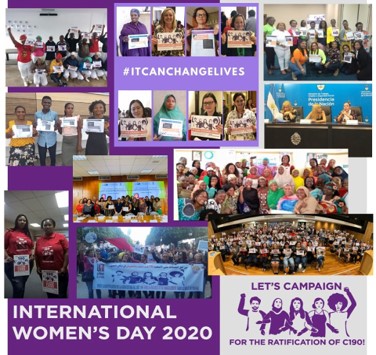 Union campaigns around the world 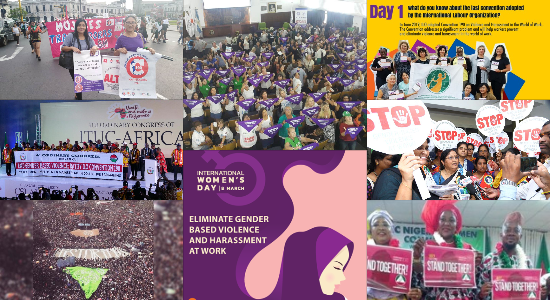 While Uruguay has completed its national ratification process, union campaigns in Costa Rica, Dominican Republic, Argentina, Mexico, Canada, Panama and Nicaragua are making significant progress. On 8 March, International Women’s Day, unions in the region mobilised around the ratification of C190 by holding forums, workshops, seminars and marches, and more than 35 union actions were organised including by CATP Peru, CTRP Panama, CUT Chile, CGTRA Argentina, CGTG Guatemala and CMTC-CSJMP, ANEP-CTRN-CUT  Costa Rica (La Mesa Sindical de Mujeres in Costa Rica). In the Dominican Republic, women leaders of the CASC, CNDT and CIMTRA joined forces in the media calling for the ratification of C190. In Canada, CLC published a revised handbook, “Workers in Transition: A Practical Guide for Union Representatives and Trans Union Members”, which includes tools and strategies to address homophobic and transphobic violence and harassment at work. In Chile, PSI affiliates (ANEF, ANEJUD, ANEIICH, CONFUSAM, CONFEMUCH y FENPRUSS) held a C190 webinar to discuss campaign plans within the context of the COVID-19 pandemic with a focus on domestic violence.

In Indonesia, the union campaigns moved a milestone: in March, the Indonesian Ministry of Manpower announced its support for the ratification of C190. The Ministry also stated that it was planning to submit the text of the Convention to the Central Parliament with a view to discuss its ratification. In the Philippines, SENTRO conducted a series of meetings with representatives from the Ministry of Labour and legislators and is confident that the government supports the ratification of C190. In Australia, following the Australian Sex Discrimination Commissioner’s recent report that found that “sexual harassment at work is rife and current laws are failing to keep workers safe”, the ACTU joined with more than 100 organisations and individuals on a statement calling for urgent changes, including stronger workplace health and safety laws requiring employers to tackle the underlying causes of sexual harassment at work. In India, alongside the ITF qualitative study with male perpetrators of domestic violence in the state of Maharashtra, the ITF is conducting a national study with the unions on understanding the impacts of domestic violence at work from a survivor’s perspective.

Within the context of the COVID-19 pandemic, several unions in Europe are calling for the ratification of C190 and the adoption of adequate prevention and protection measures against domestic violence. In France, CGT  is urging the government to provide adequate protection, compensation and rights for women affected by domestic violence due to the confinement measures. CGT’s demands tally with the related provisions of C190 and R206. UGT and CCOO in Spain are calling for the protection of victims of domestic violence and are urging the Spanish government to ratify C190 (see 8 of March manifesto and here). In Denmark, following the release of new research, the social partners and authorities are joining forces to confront widespread harassment in Danish workplaces, particularly sexual and gender related behavior, which affects far more women than men, including in politics and IT. The Danish parliament committed to increasing compensation for workers who have been harassed at work, and to sharpening guidelines for workplaces “so that no-one can brush sexism aside by saying ‘that’s just the culture here’”. The Netherlands will begin tripartite consultations on C190, and the Dutch Minister of Labour and Social Affairs has confirmed that the government will ratify C190.

In Morocco, the “Coalition 190” formed by the national trade union centres CDT, UMT, UGTM and FDT is raising awareness on C190 and has sent a joined memorandum to the government underpinning the importance of ratifying C190. In Namibia, the Ministry of labour hosted a workshop in preparation for the ratification of C190. The workshop was preceded by a study on violence and harassment in the world of work, conducted with a view to contribute to the formulation of policies and programmes.  In Nigeria, the NLC called for the ratification of C190 during a stakeholders’ round table organised by the NLC National Women’s Commission (8 March, 2020). In Madacasgar, Sekrima launched its C190 ratification campaign on 8 March.

Actionaid’s recent report, "We mean Business: protecting women's rights in global supply chains" focuses on gender due diligence and includes case-studies of gender-based violence in the garment sector. The report shows that the adverse impacts of business activities are not gender-neutral and states that in line with C190, “businesses should assess the risk of sexual harassment and gender- based violence in their supply chains”.

Global Labor Justice and the Asia Floor Wage Alliance launched in March a new global campaign #GarmentMeToo demanding an end to gender-based violence across the global garment supply chain. The campaign aims to encourage brands and their suppliers to bargain with unions to create changes on production lines at the industrial level and along global supply chains.

In Brazil, a gender violence study in Brazilian garment factories, funded by the Brazilian branch of the C&A Foundation and undertaken with support from the Solidarity Center, found the most frequent form of violence is bullying, with supervisors screaming and cursing at workers, threatening them if they do not produce at the required pace and harassing them for using the bathroom. 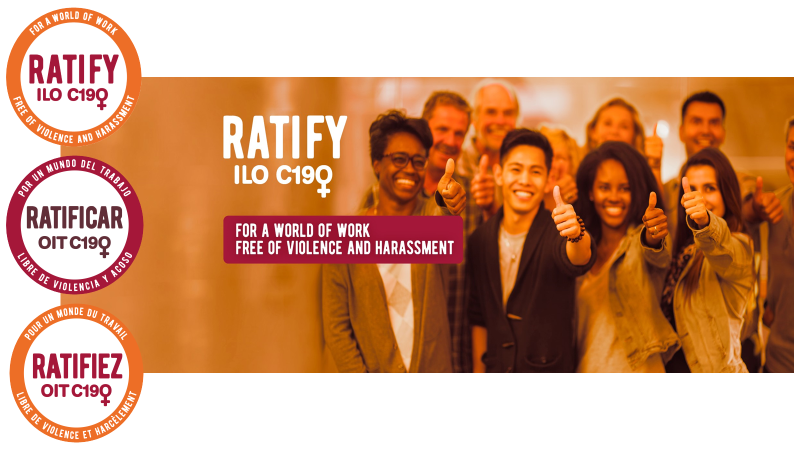 The ITUC will continue to develop a toolkit of materials to assist unions in addressing gender-based violence and harassment and campaigning for C190 ratification, including frequently asked questions and answers, a legal briefing, C190 bargaining guide and more. Contact us at equality@ituc-csi.org.

Share with us your lobbying and #RatifyC190 campaign updates at equality@ituc-csi.org including new developments in law and practice and collective bargaining agreements.